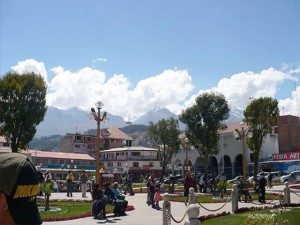 Huaraz city ( 3,090m.) Is located 410km. north of Lima about eight hours b1311695912_huaraz-celebra-154-aniversario-de-creaciony Bus and 40 minutes by airplane, Huaraz is a capital of the Ancash departament, Huaraz is the main city

In the Callejon de Huaylas located in the foot of the Cordillera Blanca.

Huaraz is the center for for high – altitude sports and outdoor activities it is used as the base for many expeditions, trekking, climbing, mountaineering , mountain bike, horseback riding, around the Blanca Mountain Range Huayhuash Mountain Range and the Cordillera Raura.

Huaraz was createdon july 25 on 1857 during the president of Ramon Castilla. Huaraz has suffered several disasters.

In 1941 originating flood from the palcacocha lake in the cojup vallley it destroyed half of the Huaraz city Killing 5,000 people. Simce then the governament has worked the control to the water level in all lakes of the Cordillera Blanca. 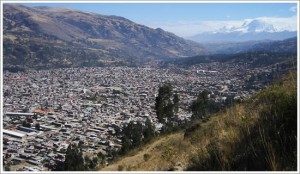 The strong earthquake on May 31 – 1940 measuring 7.8 on the richer scale, this earthquake shook all callejon de huaylas , conchucos and coast of Ancash 70,00 death and 250,00 casualties. After earthquake Huaraz was rebuilt almost complety so the architecture and building do not have the the characteristics of Ancash city.

​The main economic activities in the city, is supported by the agriculture, commerce and tourism mainly, because Huaraz has the big amount of tourist infrastructure in the Ancash Highlands, the city is the main point of arrivingfor practicers of adventure sports and mountaineering in the snow peaks of the Cordillera Blanca, as if the visit to archeological sites Chavin de Huantar and the eastern highland of Ancash, as known as Conchucos.

By Air: The airport infrastructure is limited, only there is a small airport to 20km from Huaraz.lcperu dash8 q200.

For flights, Huaraz is served by the small airport in Anta , 23 kilometers north of city it is located in Anta village ( approximately 30 minutes drive). the flight from Lima to Huaraz take 45 minutes.

Only one commercial airline, LCPeru, flies into Huaraz.

But there is rectriction regarding the luggage, each passanger can take with them only 15kg in the cargo compartment and 5 kg in hand. The last year they were offering only one flight in the morning per day in whichever destination, Huaraz – Lima or Lima- Huaraz. 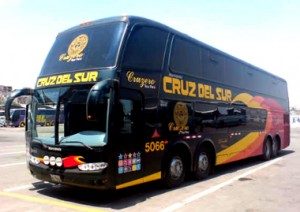 BY Road: It is the most common way it has anasphalted road of 408km from the DSC00032Lima City , the time that delay an interprovincial Bus is from 8 to 9 hours.

The price of a passanger in interprovincial bus changes in funcionto the quality of service that the companies give.

Ther are many companies as schudeles from Lima to Huaraz. that offer these service , the most known bus companies are:

It is also a good time between May and September but of course you have to be prepared for occasionnal showers.